The awards program looks at 26 vehicle segments and forecasts which will retain the highest percentage of MSRP value after a three-year period. The awards will be presented at the Los Angeles Auto Show.

“Residual value is important for automakers and consumers because it’s a complete indicator of the vehicles future value, accounting for quality durability and brand desirability among other factors,” said Larry Dominique, president of ALG.

Land Rover’s win as the top premium brand is the company’s first. The brand was credited with having a consistent “stream of hot, new vehicles” with high customer demand, says ALG.

“Some Land Rover models are in such high demand that they’re selling above MSRP — a remarkable achievement that’s only possible with manufacturer restraint and a tightly controlled supply chain,” said Dominique.

Toyota was the top mainstream brand, capturing five segment awards, including top honors in the alternative-fuel, truck and premium categories.

Eight new vehicles made the winners list for the first time, including the Dodge Charger for full-size car, the Subaru WRX for sports car and the Ford Transit Connect for midsize commercial van.

“It is great to see such a diverse mix of brands winning this year,” said Dominique. “It shows the industry as a whole continues to improve residual values benefitting consumers and automakers alike.” 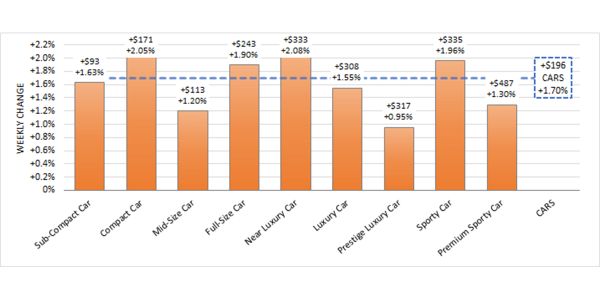 During this quarter, retail sales recovered much more quickly than fleet sales from the effects of the COVID-19 pandemic.

The world has changed over the last few months with COVID-19, and we’re all going to have to find our new normal. To do so, we all must stand tall and stand together.

Performance Ford said today its internal service technicians are producing at 150% labor efficiency, thanks to their use of Rapid Recon.